As soon as the new year started, the fire brigade in Krefeld had to rush to a significant fire with a large crew. In the Krefeld zoo, the tropical monkey house caught fire, according to the current state probably due to flying fire balloons, also known as sky lanterns. At the time of the fire, the animals were still in the monkey house, which unfortunately did not survive the fire except for only two chimpanzees. The permanent inhabitants included Borneo orangutans, western lowland gorillas, chimpanzees, marmosets, agoutis and free-flying birds. The building was built in 1975 and always offered a temperature of 20 – 26 °C at 70% humidity for the monkeys on 2,000 m².

Donation to the Krefeld Zoo

After this shattering night, the Krefeld Zoo closed unscheduled on January 1; in front of the entrance, visitors placed candles in memory of the deceased souls. The lives of the monkeys can no longer be restored, but the Krefeld Zoo, more precisely the Zoofreunde Krefeld eV, can momentarily use any help. Especially monetary help, of course. If you want, you can donate something to the organisation, either once or at regular intervals, and even conveniently via PayPal, alternatively also by credit card or direct debit. A donation receipt can also be obtained on request. Everything can be found directly on the Krefeld Zoo website: https://www.zoofreunde-krefeld.de/spenden (you might want to use Google Translate to translate the donation website, as it’s not available in English, german only)

If you prefer to transfer something via your bank, you can also use the following donation accounts:

Or, maybe someone would like to sponsor an animal from the Krefeld Zoo for a year? Everything else on the following page: https://www.zoofreunde-krefeld.de/tierpatenschaften 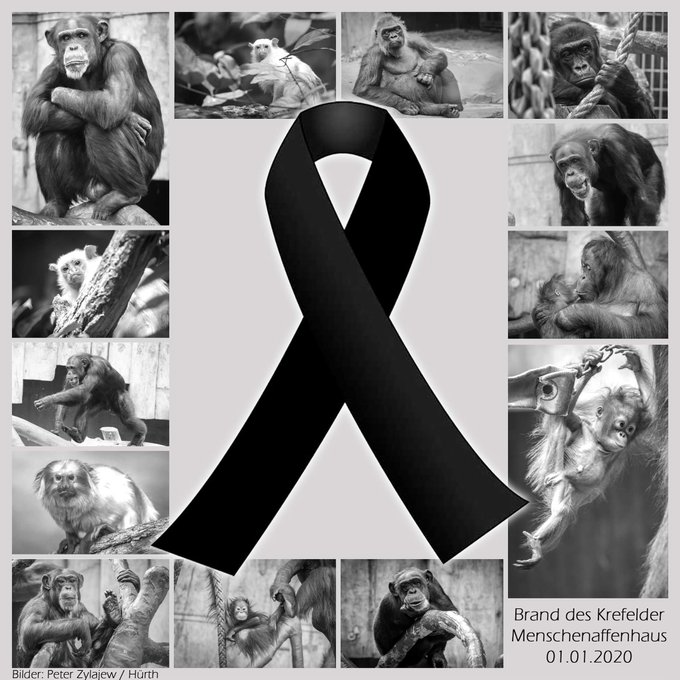 More than 30 animals died in a fire at #Krefeld Zoo in Germany on New Year's Eve, including Europe's oldest gorilla.https://t.co/xSvuhITWIn pic.twitter.com/kBKWCcRwBE

Important information for your safety

ZOO will be closed until January 2nd

The chimpanzees Bally and Limbo miraculously survived the devastating fire. They are only slightly injured and are now housed in two boxes in the GorillaGarten. They are looked after by several zoo veterinarians.

We would like to take this opportunity to thank you for the overwhelming wave of compassion and offers of help that reach us on all channels. Our employees bear that. We also thank for the solidarity in the social networks. We read everything, but are still unable to respond.

Active help at the fire site is currently not possible because the house is in danger of collapsing and as a crime scene is closed by fire experts and the police department.

We are grateful for donations of any amount. We will continue to focus on keeping apes in the future and we will build a new house.

Lisa is a Blogger for more than a decade now, sharing her adventures exploring the world on JoyDellaVita, as well as excursions into the culinary world, sustainable choices, how to live a healthy active lifestyle but overall how to enjoy a life full of joys.

Why you should visit PalaisPopulaire in Berlin

The foreseeable challenges for Planet 2.0 in Space

Things you have to do at a german Christmas market

5 Fun Activities to do on your Phone while Traveling

How to calculate your water footprint

Joy Della Vita, an Italophile Travel Blog with a passion for traveling and exploring, cooking, enhancing health and discovering new things.
Based in southern Germany/Central Europe but travelling and exploring the World, especially Italy, Austria, Liechtenstein and Switzerland.
More on the About Page.

This website uses cookies to improve your experience. We'll assume you're ok with this, but you can opt-out if you wish. Accept Read More